What’s up, so here’s the Samsung Galaxy S10, and this phone is really hot right now obviously, and one of the main reasons for that, is the display. Some people love it, a few people hate it, most probably the Apple fanboys out there, but there’s no really arguing that there’s not really a lot to not like about this phone’s display, so this is a closer look at what makes the Galaxy S10 so special, #ThatScreen.

So I’ve said in one of my articles before, this is the best display on any phone, there are really three main characteristics that makes this such a unique display.

Read Also – The best 11 features that makes the Samsung Galaxy S10 and S10 Plus, both futuristic smart phone.

So to start with the hole punch cutout, on our way to bezeless displays, we’ve got notches, we’ve got smaller notches, and then eventually we got things like the fingerprint reader moving behind the display glass, which is same with the case of the Galaxy S10 and S10 Plus, so the only thing left, is(are) the front facing cameras.

So on the Galaxy S10, it’s a laser cut hole in the Samsung’s AMOLED panel, a process that’s not totally unique, cause we’ve already seen something of that nature on Huawei’s Honor View 20 and even on the Nova 4 smart phone, but those were LCD displays, but this is of cause an OLED, so this being the first on an OLED, Samsung is really proud of it, and how precise it is, and i can vouch the hole cut is definitely a little tighter around the actual camera than others.

Also something interesting, is the Galaxy S10 has that single cutout, while the Galaxy S10 Plus has a double cutout for that second camera. Now one thing you have to know is this, the second camera beside the main 10MP front facing camera of the Galaxy S10 Plus, is not really an actual camera, I’m not saying it’s not an actual camera lens, all i’m saying is, it only acts as a depth sensor when taking selfie portrait shots in order to help blur the background more naturally, so it doesn’t do anything else like taking wide angle shots and all of that. So please take note of that. Now back to the notch, sorry, the punch hole.

So far, it’s actually really not that bad at all, i mean despite it being basically a notch, especially with the double cutout on the Galaxy S10 Plus variant, i still manage to find it a little less intrusive than an actual notch. And also for those wondering, this is how screen shots look on the S10 Plus when it’s drawing that animation on the camera cutout.

Alright so the second distinguishing feature here, is the ultrasonic fingerprint reader, that is hidden underneath the display.

Now first of all, there are basically two things to take note of here, and those things are, first, Samsung is not the first smart phone manufacturer to have an under the display fingerprint reader, but, they are actually the first to make use of an ultrasonic one, so the keyword here is the “Ultrasonic“. And being an Ultrasonic fingerprint reader simply means it is much more secured and pretty hard to get fooled, reason is because, unlike the generic optical fingerprint readers that simply takes a photo of your fingers and compares it to the one that was preregistered, the Ultrasonic fingerprint sensors makes use of sound waves that bounces on and off your fingers in order to map the depth of the ridges of your fingerprint in 3D, to unlock the smart phone. It’s just as simple as comparing a 2D face unlock to a 3D one, now you get the drift right?

Another thing to take note of, is these fingerprint sensors will work even when you have particles of dirt on your fingers, or when your hands are wet, but the optical ones wouldn’t pull such stunt. So that’s a plus there.

Alright so the last big baller point for this display, which is just the panel itself, is just how good it is, period.

So resolution; “3040×1440p“, which makes it a 3K display, the brightness is “1200nits” at its peak brightness, which makes brighter than most TVs, it’s 6.4 Inches from corner to corner on the S10 Plus, and still a pretty large 6.1 Inches on the regular S10 model. It still retains its signature Samsung curved sides and curved edges too, and the super thin top and bottom bezels, basically the thinness bezels you can get on a Samsung phone right now. 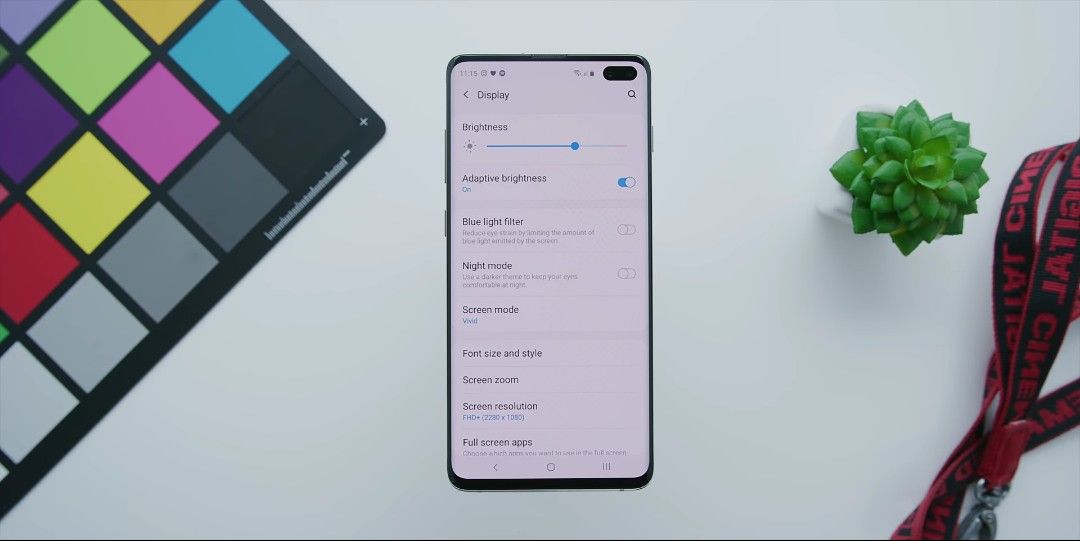 So there are two display modes, out of the box its on this “Natural Mode“, which actually to my eye for the first time ever in a Samsung phone, actually looks a bit muted off the box, then there’s the “Vivid Mode” which looks very saturated, vivid is a great word for it, there’s still a lot of those adjustable color temperatures and all that, but as you know, that’s basically what you expect from a Samsung phone.

Also off the box, the smart phone’s display resolution is set at 2280×1080p instead of its max resolution, which is to preserve battery life, but if you want that extra bit of crispness, especially when watching videos, you can go ahead and bump that up in the display settings and enjoy all of the pixels, in their 3K glory.

But as of right now, that’s pretty much everything you need to know about the Galaxy S10’s display, it’s one of the reasons why people like this phone so much and many other Samsung displays in the past, that’s why their phones are popular. But in the meantime, let me know what you guys think, of course this is not the full review, that article is in the pipeline too, so feel free to subscribe to see that when it comes out, and of course, you can share this one too, and as always, I’ll see you all tomorrow.. Peace Out