•   If you are looking for productivity and performance in a compact body, go for the S9+, but if you want productivity and performance on a big screen with an intelligent S-Pen, then the Galaxy Note 9 is the phone for you.. So with that said, join us today as we compare these two best smart phones from Samsung so far, the Samsung Galaxy S9+, vs the Samsung Galaxy Note 9..enjoy..

Okay everyone, so during the early months of this year 2018, Samsung released to us the Samsung Galaxy S9 and the S9 Plus, and believe it or not, literally, the whole world went mad and crazy over these phones, like they were something we’ve never seen before, but we all knew that we were expecting something even bigger and better in the next few months to come, and that was the Galaxy Note 9. Now one thing you have to know about these two phones is that, with the Galaxy S9 and the S9+, Samsung did something very spectacular and prestigious more than any smart phone manufacturer has ever done before, but with the Note 9, they simply did something that nobody has ever done before, they pulled off all strings and there were no limits to what you could do on a smart phone.. So quickly, here are some of the many differentiating factors, that keeps the Samsung Galaxy S9 Plus apart, from the newly launched Galaxy Note 9..and once again… Enjoy.

Okay, in terms of design, take away the big size of the Galaxy Note 9 and these phones are basically the same thing. You know, we have same front and back curved glass bodies, same dual cameras on their backs, save for the fact that the ones on the Galaxy S9+ are placed vertically, while the ones on the Note 9 are placed horizontally. As expected, the fingerprint reader on the S9+ is more easily reachable and in more comfortable position than on the Note 9 because of its big size, but no big deals there you know. 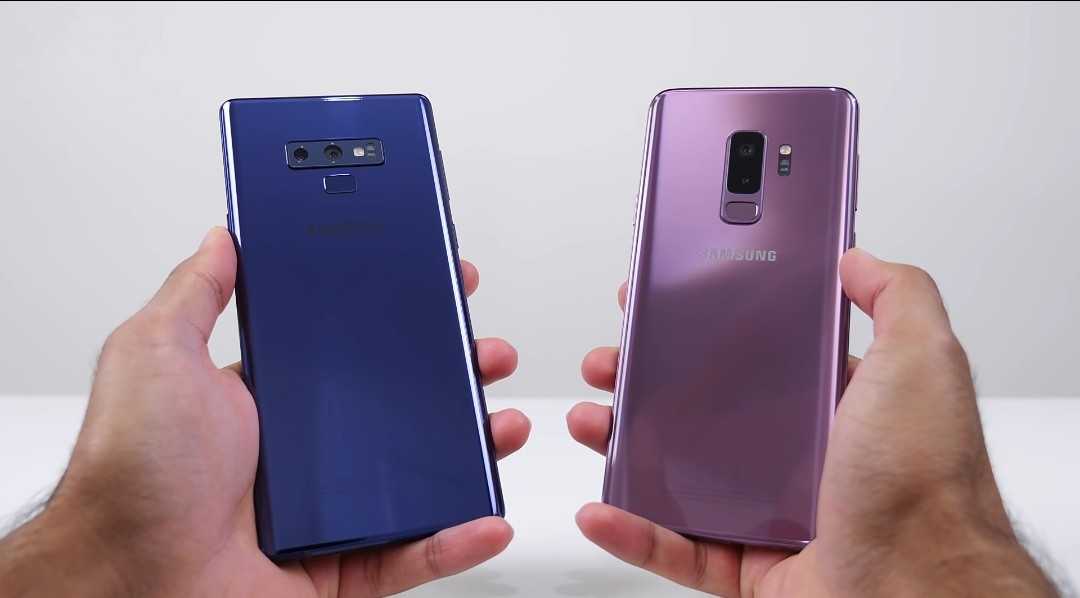 So apart from all that, i really don’t think there’s anything more to the designs of these phones, just the normal Samsung signature designs that we first saw on the Galaxy S8, S8+ and on the Note 8..So that’s it, now let’s move on to their displays.

Alright, so this is another aspect where we can say things are pretty much the same on these phones, with only their sizes being the differentiating factor. So basically we’re looking at same displays on both phones, you know, same SuperAMOLED panels here and there, same Quad HD+ Resolutions, same Corning Gorilla Glass 5 Screen Protectors on both, but different overall screen sizes. 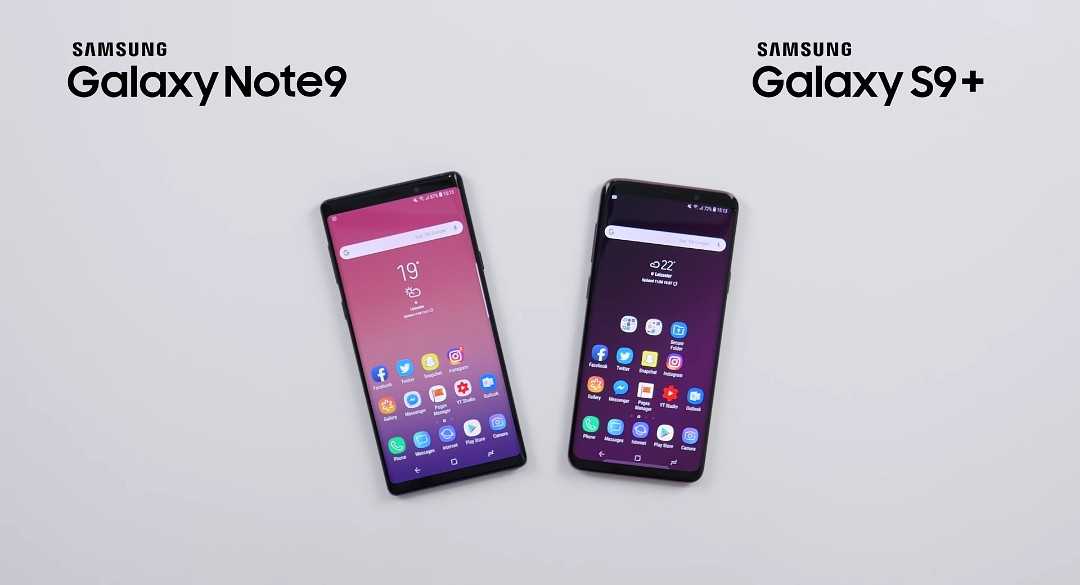 So on the S9+ we’ve got a 6.2 Inch display, while on the Note 9 is a slightly bigger but a significantly larger 6.4 Inch display. I don’t want to go into details, but you can’t just deny it that the Samsung Galaxy S9+ looks more curvier and sexier than its Galaxy Note 9 counterpart which looks much more bossy and squarely rectangular in shape, but anyways, that’s what the Notes are known for, so no diss here.. Alright then lets move on to the next differentiating factor.

Well to me it just seems the more we go into this thing, the more we discover that these two phones are basically much the same thing in every way. So speaking of processors, we’ve got the same either a Snapdragon 845 Processor or the Samsung’s own in-house built Exynos 9810 Chipset, and the same GPU(s) too, an Adreno 630 GPU for the Snapdragon, while a Mali-G72 MP18 GPU for the Exynos. So what does these mean on paper.. Well it simply means that you’re definitely gonna be getting the same speed and performance on both phones, but we can’t really attest to that right now, until we see a real life speed test between both devices or probably do one by ourselves. So that is it, now to the next one..

Okay.. same thing, same old… Same Dual 12MP Rear lenses on both devices, with same Dual Aperture thing that can change from an F1.5 to an F2.4 and reverse, same Slow Motion Video Recording at 960FPS at a 720p resolution, alongside same 8MP front facing cameras, and definitely same picture qualities on both devices, so what is probably telling the differences between these two devices.. is someone feeling the same way i’m feeling right here and right now.. i’m feeling cheated and fooled you know.. But anyways, let’s move on and maybe we’ll surely get to see some things that will make us to really appreciate the Samsung Galaxy Note device. So on to the next one. 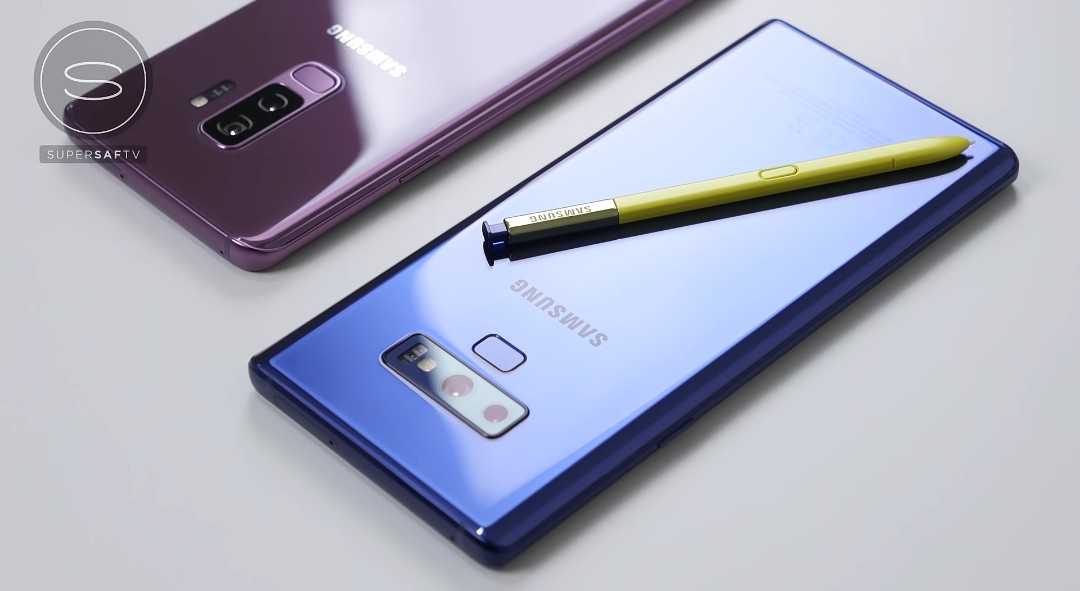 Okay, now something tells me this is where things are really gonna try to get interesting you know. Alright remember when i said back there that the Galaxy S9 and the S9 Plus were phones that Samsung used in doing what no one else has ever done before on smart phones, but the Note 9 is or was a phone that Samsung used in pushing those things to the limits. So we already know that the S9 variants already have great ample storage that should probably be enough for any kind of smart phone user even without the need to insert an extra Micro-SD Card, but the Note 9 is a phone that will make you get corrupted with just too much storage that you’re probably not gonna fill up until the next Note device launches.

So on the S9+, we’ve got a 6GB of RAM with two storage options, either you’re getting the one with 64GB of inbuilt storage or the one with 128GB, all of which are expandable using a Micro-SD Card.. Now if you think that wasn’t enough, then you’ve got to see what sort of punch the Galaxy Note 9 is packing.

First is a 6GB RAM version with same 128GB of storage as spotted on the S9+, then there is this mad 8GB RAM version with a 512GB of inbuilt storage, and if you still think that was still very crazy, just buy a 512GB Micro-SD card and insert it into the 512GB Note 9, and you have yourself a portable and intelligent 1TB Hard Disk Drive.. Now who can beat that..?.. Alright then to the next.

Well was i even supposed to include this as one of the differentiating factors between the Galaxy Note 9 and the Galaxy S9+?.. Because literally everybody knows it is only the Note series smart phones that comes with an S-Pen, the S series have never done that and i don’t think they’re gonna be doing it anytime pretty soon, but all the same, it is a point worth noting out, the Galaxy Note 9 comes with a stylus, codenamed the S-Pen, while the Galaxy S9+ came with none.. So that’s all. 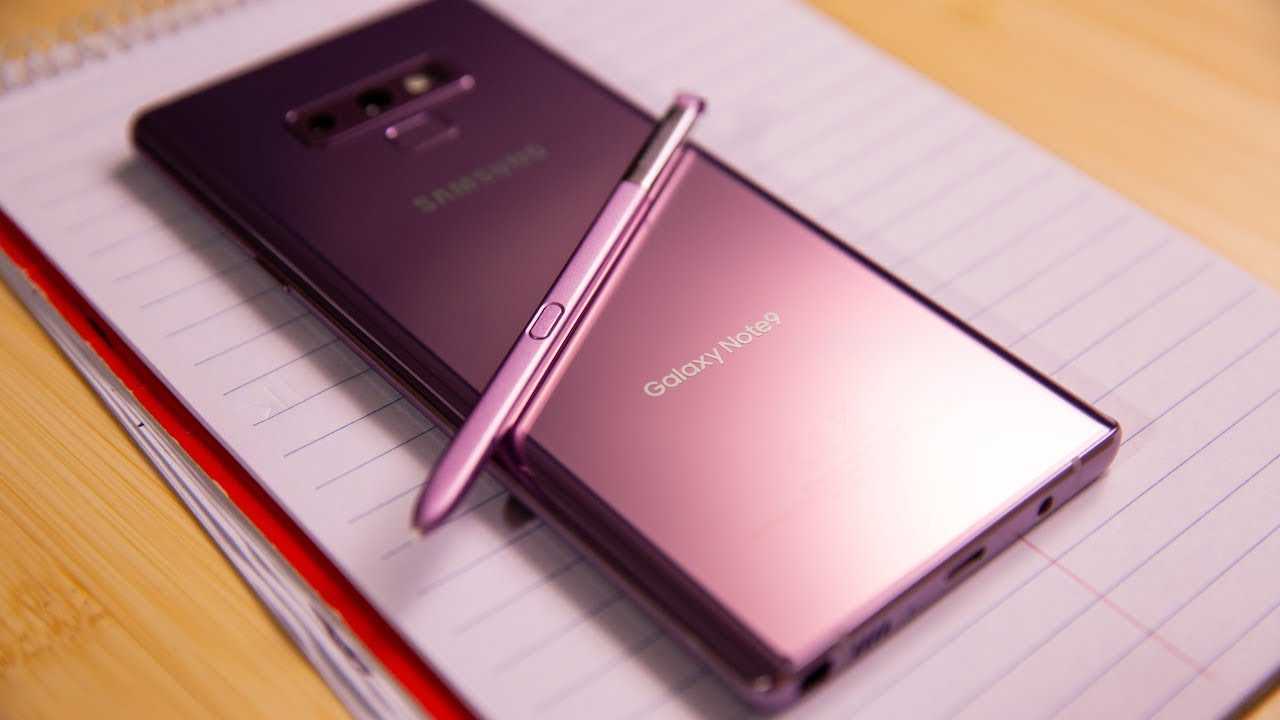 Now even if we still consider the prices of both phones to be on a high side, there’s no still disputing the fact that the Galaxy S9+ is a little bit easier to get and afford that the Galaxy Note 9…But right now the question remains, if you already owned the Galaxy S9+, is it wise to upgrade to the Note 9?..and the answer remains NO.. reason is, read the whole page again once more to get the several numerous reasons.

Alright guys, so with that, i will be bading you all goodbye at this juncture, let us know what you think about the Samsung Galaxy S9+ and the Galaxy Note 9 in the comments section below, share our articles and subscribe to our newsletter for free if you haven’t done so already, and catch you on the next one.. bye.